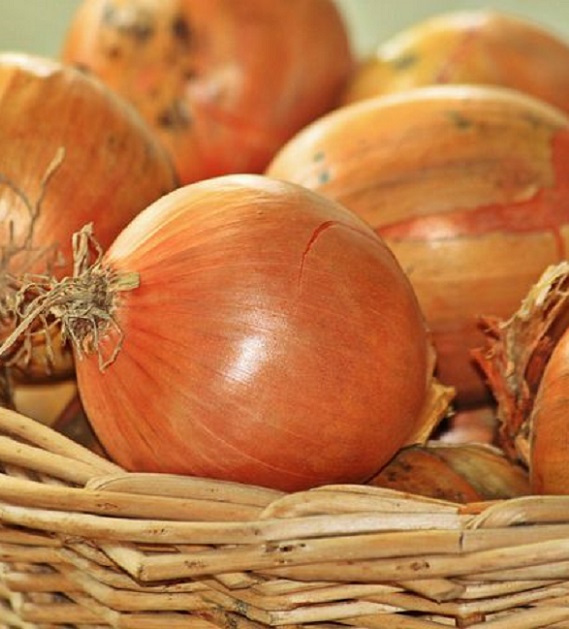 Oh the humble onion, a staple in pretty much any savoury dish, whether it is soup, curry, casserole, pasta, salad, the list goes on. It couples extremely well with garlic and the aroma these two release when cooking together never gets old. Although onions are vegetables they are often forgotten about when it comes to serving up vegetables as part of a meal, roasting a quartered onion in some rapeseed oil and balsamic vinegar along with your other roasted veggies – delicious! Your average sized onion, once peeled and had the root and stalk removed, weighs in at around 80g which is the weight of one portion of your 5 a day – perfect! Eating an entire onion might seem quite daunting but roasting it in chunks and adding it to meals makes it an easy task. Alternatively incorporate it into any sauces, or diced up finely and added to salads, whizzed into soups too.

Onions can be white, red, shallots or spring, these are the main varieties that feature in the average British diet. White onions are best used in sauces and soups, red onions in salads or to add colour to chillies, tagines etc, shallots are often used in French dishes and have a sweeter flavour and spring onions again in salads or as a garnish to stir fries.

As they are such a popular feature in so many meals it would make sense to grow your own. Onions can be grown from seeds however it is easiest if you plant them from baby onions, also known as sets and early spring is the best time to do so.

Onion fact: do onions make you cry? If yes then this is because of the sulphur within the onion which is released as a gas when the onion is cut into, the sulphur is more concentrated in the root therefore when cutting an onion avoid cutting the root off at first. The sulphur is still found in the rest of the bulb however so could still cause some tears. This build-up of sulphur is there to protect the plant from predators as it will cause animal’s eyes to water just like it does ours. 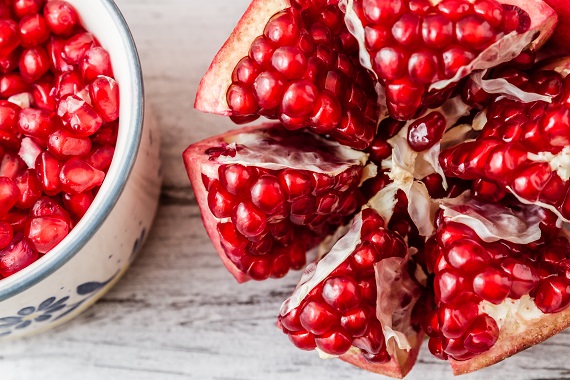 This fruit has boomed in popularity in recent years, with its seeds encased in juicy ruby red sacs and its skin and pith can’t be eaten as they are tough and bitter. The seeds are usually used as a topper for breakfasts or salads or eaten as a snack. Pomegranate has been labelled as a superfood by the media, however superfoods are a myth and pomegranate provides no more benefit to the body than the next fruit. That said though, pomegranate is a source of vitamin B6 which is important in the formation of haemoglobin, the protein within red blood cells that transport oxygen around the body, and this fruit is also a source of vitamin C, a well-known nutrient essential in immune system function and it also helps the body absorb iron that comes from plant foods such as spinach and cabbage.

When buying pomegranates those heavy for their size are typically the juiciest, and a shiny skin means it is fresher, but any you buy should guarantee juicy, sweet pockets of goodness.

Recipe tip: we use pomegranate seeds in our Harissa Roasted Aubergine Tacos recipe to add a sweetness to the spice of the harissa. 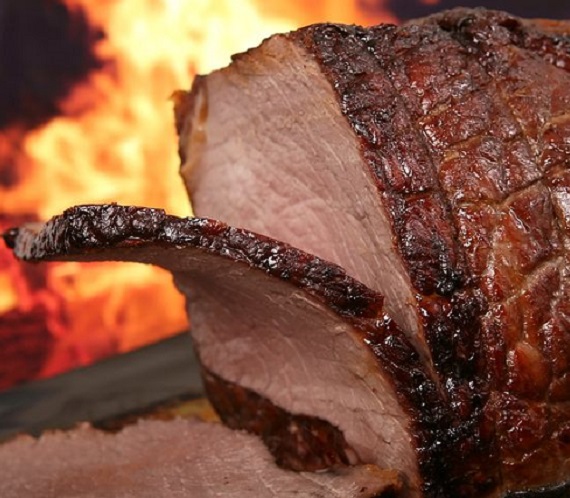 Pork is in season all year round as in Britain it is reared throughout the year, it is available in all kinds of cuts and we recommend opting for those with minimal fat on the outside, or if there is fat present cutting it off prior to cooking. In winter pork makes a great centrepiece for a traditional roast dinner, whilst in summer pork mince goes great in a burger or diced pork on skewers for the barbecue. We have our very own Pork Loin with Fennel and Herbs for the colder days and then Pork, Quinoa and Cheddar Burger and Harissa Pork Skewers for the barbecue days, or any other day of the year that takes your fancy.

It is the most common meat used in sausages here in the UK, and sausages are considered to be processed meat. Along with red meat it is recommended that we consume up to 70g a day of red or processed meat, and ideally have some days without, choosing poultry or fish instead. To put this into context 70g of pork is equivalent to one sausage or 2 slices of premium ham.

Pork is probably one of the most versatile meats as it is not only eaten in its various cuts but in sausages, as bacon, salami and other cured meats and as mince. When cooking it we recommended grilling or roasting where possible and if you do need to use oil opt for rapeseed oil over other oils as it is high in unsaturated fats.

Nutrition fact: pork is a high source of protein, phosphorous and a source of zinc and potassium based on a grilled serving of pork chops. 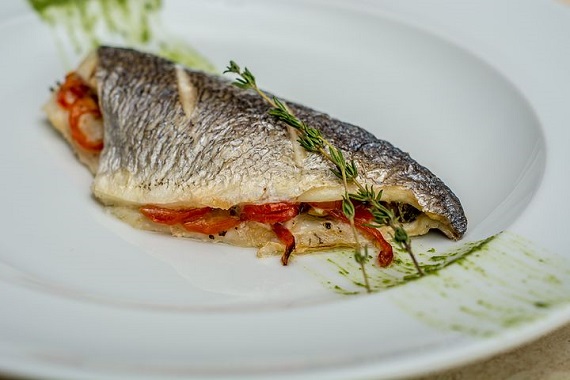 Spring is the time for Sea Bass, a delicate white fish that is farmed in Europe and is found in the wild in the North East Atlantic ocean. Stocks of sea bass in the wild are not sustainable, the level of wild sea bass is low, therefore the Marine Conservation Society recommend us to avoid buying wild sea bass, instead choose sea bass that is farmed where stock levels can be carefully controlled to avoid overfishing.

It is a mild tasting fish, with a delicately meaty texture, and tastes delicious combined with lemon or rosemary. It often features in dishes alongside simple steamed vegetable combinations, sea bass is best served with mellow flavours, nothing that is overpowering or that will detract from its flavour. Our Burnt Pineapple, Lime and Cashew Nut Salad would complement grilled sea bass perfectly.

Bass benefits: sea bass is high in protein and selenium and the latter nutrient plays an important function in protecting cells and tissues from damage and also is essential in both male and female reproductive systems.

What's best to eat in February?

Nothing tastes better than eating in season. Find out what's at its best in February

What's best to eat in April?

Nothing tastes better than eating in season. Find out what's at its best in April.

What's best to eat in May?

Nothing tastes better than eating in season. Find out what's at its best in May