The digestive system starts at the mouth through the oesophagus, stomach to the small and large intestines. The liver, gallbladder and pancreas also play an integral part in digestion. As food is eaten each part of the digestive system plays a role in extracting and absorbing nutrients. These nutrients (carbohydrates, fats, proteins, vitamins and minerals) are needed for energy, growth, maintenance and repair of the body’s cells.

Diet plays a pivotal role in good gut health. Fibre comes in two forms soluble and insoluble, both are important for digestive health. Soluble fibre dissolves in the gut softening stools, making them easier to pass. Insoluble fibre adds bulk to stools and aids the transit of food through the digestive system.

The Eatwell Guide outlines how much the general population should be consuming for optimum health including optimum gut health:
• Consume at least 5 portions of a variety of fruit and vegetables each day. 1 portion is equal to 80g of fresh, tinned or frozen fruit and vegetables; 30g of dried fruit; 80g of pulses and 150ml fruit/vegetable juice or a smoothie (pulses and juice only count once in a day).
• Base meals on starchy carbohydrates and choose wholegrains where possible – foods include potatoes with skin left on, wholegrain varieties of pasta and bread, breakfast cereals and rice.
• Fluid intake - Drink 6-8 glasses of fluids each day, especially water. Fibre absorbs water, softening and encouraging the movement of stools through the gut. Without sufficient fluids the body can become constipated. Limit sugary drinks.

Probiotics - A healthy digestive system contains trillions of bacteria some of which are important for good health. Bacteria help digest the nutrients from our food, keep the gut moving and the bowels functioning properly. They even produce some vitamins, so it’s important to keep a healthy balance of good bacteria within the gut. Probiotics are known as good bacteria that are robust enough to pass through the gut alive. They can be found in products such as fermented milk drinks, yoghurts and dietary supplements. Don’t confuse probiotics with ‘live’ yoghurts. Probiotic bacteria is robust enough to pass through the whole digestive tract, unlike live yoghurt bacteria. A quality probiotic will state on the pack the strain and amount of bacteria present (at least 1 billion is recommended). If choosing a probiotic drink be sure to check the labelling as some contain high quantities of sugar. Choose reduced sugar variants where possible.

Prebiotics - Not to be confused with probiotics, prebiotics are types of carbohydrate that our gut bacteria feed off promoting further growth of good gut bacteria and inhibiting bad bacteria growth. Prebiotics are found in bananas, asparagus, artichokes, onions and garlic.

Diseases linked to the Digestive System 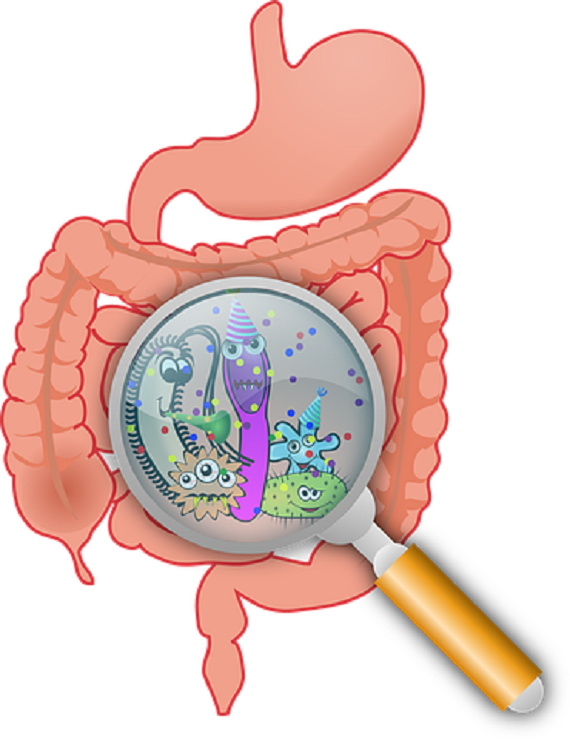 Bowel cancer is the 4th most common cancer in the UK with over 41,000 people diagnosed each year. Both men and women get bowel cancer and most people are diagnosed over the age of 50. Bowel cancers start in the bowel lining and if left untreated can grow through the bowel wall spreading to other organs.
Risk factors for developing bowel cancer include age, diet and lifestyle, genetics and medical conditions.
Symptoms of bowel cancer include blood in the stools, change in bowel habit, lower abdominal pain, bloating or discomfort after eating.

Coeliac disease is an autoimmune disease affecting approximately 1 in 100 people. Coeliac disease can affect anybody however it is more common in women than men and is most likely to develop either in early childhood (before the age of 1) or in later adulthood (between the ages of 40-60).
Causes - coeliac disease is caused by a reaction to gluten. If someone with coeliac disease consumes gluten they will have an immune response which causes damage to the lining of the small intestine. This can impact on nutrient absorption as the small projections that line the small intestine, called villi, are flattened causing reduced nutrient absorption. Therefore it is important that coeliac disease is identified.  Once diagnosed it is managed by a gluten free diet for the rest of the individuals life. Gluten containing grains include wheat, barley, rye and oats and are commonly found in an array of foods such as bread, pasta, cakes, breakfast cereals and ready meals. Gluten is often found hiding in foods such as chips, sauces, some processed meats and seasonings.
Symptoms of coeliac disease include bloating, wind, constipation, diarrhoea, abdominal pain, nausea, weight loss and fatigue.

Irritable Bowel Syndrome (IBS) is a bowel disorder with symptoms affecting up to 20% of the population. IBS is more common in women than men and usually develops between ages 20-30.
Causes – a definite cause of IBS is unknown however experts suggest it to be related to digestive problems such as constipation and diarrhoea because brain signals traveling to and from the gut are disrupted. Gut sensitivity – being oversensitive to gut nerve cells may also be a possible cause. Psychological triggers such as stress and anxiety can cause chemical change affecting normal gut function. Fatty foods, processed snacks, chocolate, alcohol, fizzy and caffeinated drinks have also been found to trigger IBS symptoms.
Symptoms include abdominal pain, bloating, wind, passing mucus, changes in bowel habits, nausea and fatigue.

Why is hydration so important?

Your body is nearly two-thirds water!

Welcome in spring with this quintessentially Italian dish

Get yourself checked out if you do suffer from chronic pain as it may help improve sleep.